Baaary: Mutton Commando is a cyborg sheep from the distant future who must preserve the future of mutton-kind by defending the fields from an invasion of Traazkists led by the evil combat lizard, Traazk.

Armed with a basic plasma spitter, Baaary is teleported into the field where he must destroy meanies and collect charges to prime the gateway and clear the level.

Shoot the aliens and collect the bonuses which are dropped when they are destroyed in order to progress to the next level!

The goal of each level is to open a gateway by collecting charges which are dropped by the aliens when they are destroyed. When enough charges have been collected, as seen by the charge bar in the status display, it will open somewhere on the level.

The gateway remains open for a limited amount of time before closing again. Baaary must find it and pass through to destroy all of the aliens and exit the level before the timer expires. The time to find the gateway is short but can be increased by collecting time bonuses. If the gateway closes, it must be re-opened by collecting charges again.

Destroying a meanie might cause it to drop an item:

When the gateway is open the gateway timer will start counting down and the arrow beside it shows the shortest direction to the gateway (the level wraps around so you may go either way). Walk or jump through the gateway to clear the level and progress.

If Baaary doesn’t reach the gateway in time, runs out of energy, overloads or falls down a hole the gateway closes and he must start collecting charges again. It is best to ensure that Baaary has adequate energy and time before collecting the last charge.

Firing your weapon, moving and colliding with meanies will consume energy. Stopping and eating the grass or destroying a meanie allows Baaary to absorb energy.

Burning out, running out of power, falling down one of the many holes of doom will cost Baaary one of his lives. Be aware that some of the meanies drop bombs that make new holes and some drop napalm which destroys the grass. It is best to identify these and eliminate them first. 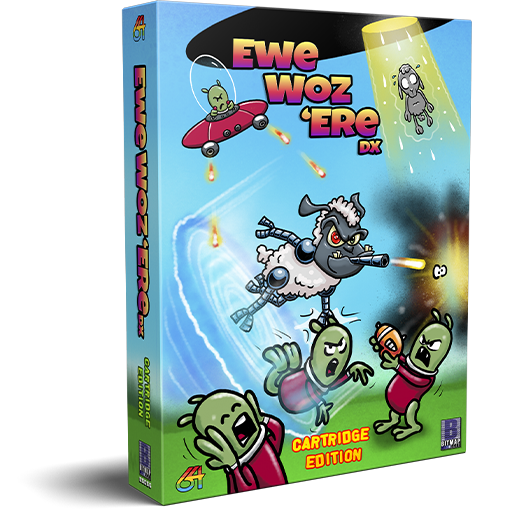 Compatible with TheC64 Mini and Maxi

Fun game, tried it out last night - back today to send a little financial support to the developer for their work.  Thanks for the smiles!

This game is better than ever. Great game ! Congrats ! 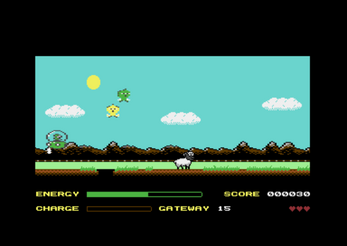 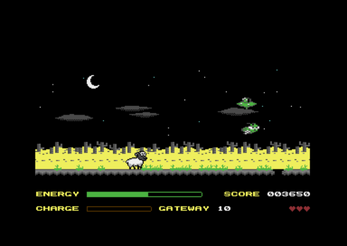 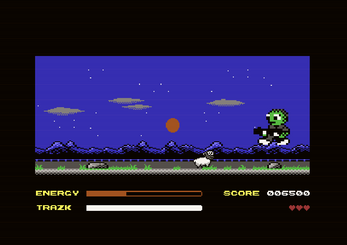 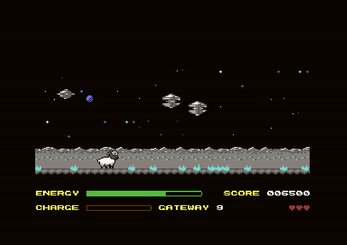